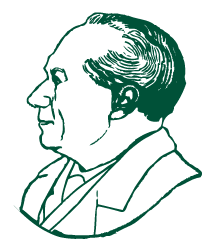 Frederik (Frits) Willem van Eeden was born on October 26, 1829, in Haarlem, the Netherlands. His father was a bulb grower, and his son, Frederik van Eeden, a writer. Frits was sickly as a child and, as a result, was a bookworm. His first job was in his father’s bulb nursery; however, he turned out to be a poor salesman. Later, in 1859, Frits succeeded his father as secretary of the Koninklijke Maatschappij ter Bevordering van de Nijverheid (Royal Society for the Promotion of Industry). In 1864, he had the task of generating a collection of correctly identified colonial items for a museum. In 1900, he became director of the Colonial Museum in Haarlem. Frits van Eeden died on 4 May 1901 in Haarlem. During his burial ceremony, his grave was decorated with a wreath of plants (considered by many to be weeds) from the dunes.

During a memorial speech in 1951, Professor A.A. Pulle (at the time a board member of the Van Eeden Foundation) described Frits van Eeden as follows: “He was not a botanist in the normal sense of the word. Since all of his publications in the field of botany were mixed to such an extent with romance, poetic outpourings, philosophical reflection, and considerations about mankind and what needs to be improved, it is difficult, if not impossible, to sift the botanical facts from the rest.” Frits van Eeden has also been described as a somewhat strange and difficult man, a conservative and a rationalist. He did not like modern things. He was always searching for the “primitive Dutchman” , the unspoiled, simple man, and thought he would be found on the Wadden/Frisian Islands. Nevertheless, his comprehensive general knowledge, his dedication and enthusiasm, and his pleasant character made Frits van Eeden a respected individual. He was a follower of Darwin’s evolution theory. Frits van Eeden never received an academic education. He was not a qualified biologist, but a self-made man in the field of botany.

Native plants
1868: De duinen en bosschen van Kennermerland (≈ The dunes and forests of Kennemerland) This book, as its title suggests, describes the flora of the dunes and forests of Kennermerland, a municipal area in the province of North Holland bordering the North Sea.
1886: Onkruid, botanische wandelingen (≈ Weeds, botanical wanderings). This book had a very wide circle of readers and is the reason that Frits van Eeden is considered one of the a predecessors of J. Heimans and J.P. Thijsse, two 20th century Dutch conservationists and botanists.

Frits van Eeden wrote many articles in the fields of botany and general science in Album der Natuur and Tijdschrift van de Nederlandse Maatchappij ter Bevordering van de Nijverheid. He was also the (copy-)editor of the Flora Batava, a collection of illustrations and descriptions of Dutch plants.

According to van Eeden, knowledge of the colonial flora was lamentable; there was just no more interest in it. “It is even worse with regard to the flora of Nederlandsch Guiana (present-day Suriname); only a minute amount is known. Immeasurable jungles are just waiting for Dutch pioneers. How many useful crops could we discover if we were more knowledgeable of the flora of those countries?” And “Opportunities must be made for botany students to find a job in the colonies. Students must get out into the wilds: they must be hardened against the climate and against fatigue. They must travel by foot. No idle sports, no pointless bike rides or climbing of mountains; manual labor, rowing, swimming, horseback riding, and the handling of weapons are as necessary as collecting and identifying plants.” Van Eeden wanted to train a corps of botanical researchers.

An exposition on the West Indies was organized in the Colonial Museum in Haarlem in 1899, and was a great success. In fact, the Bureau of the Exposition Commission showed a profit of 1,000 guilders, an enormous amount of money at that time. This money formed the basis of a foundation for floral research in Suriname, a foundation named after F.W. van Eeden to honor him for his efforts as “an untiring champion of Suriname’s interests”. According to van Eeden, the Netherlands had forgotten its duty as a civilized nation: why was no scientific research being conducted in colonial areas? Making an inventory of our forefathers’ inheritance was necessary!”

The Van Eeden Foundation was established in 1900. In that year, a circular was written by a number of gentlemen in Paramaribo and addressed to “the Residents of Suriname” asking for their support of the plan. A subscription form was attached to the circular. When a sufficient number of Suriname residents had agreed to participate, the leaflet was circulated in the Netherlands. In addition to Frits van Eeden, the Queen, the Queen Mother, and His Royal Highness the Prince of the Netherlands donated a sum “to increase the floral knowledge of neglected Dutch heritage.” The ultimate goal of the Foundation was to compile a flora of Suriname.

In 1913, the Colonial Museum was abolished and the Foundation continued under the umbrella of the Koloniaal Instituut voor de Tropen (KIT, ≈ Colonial Institute for the Tropics). Today, the Foundation is an independent institution.

The first large grant was awarded to Dr. I. Boldingh for “botanical research of the Antilles”. In 1932, the first edition of the Flora van Suriname (Flora of Suriname), edited by A.A. Pulle, was published.

To this day (2010), grants are awarded twice a year to students to conduct research on the flora, vegetation, and conservation of the Guianas, the Netherlands Antilles, and Aruba (see page on recently awarded grants).

Source: archives of the Van Eeden Foundation, in the Utrecht Archive.